Basic Navigation: How to read a map

Many outdoor experts place a map as one of the 10 essentials. Even if you’re just following an established trail a map can come in handy for distances and in cases where you might veer off due to the trail being covered up in snow. Many mountaineering routes are in snow or remote area without a permanent trail. Maps are also light and easy to pack, and can be easily downloaded from the internet, www.trails.com is a good site. Many friends I know, including myself carry a GPS loaded with maps and routes when outdoors. Although I love my GPS it does have limits such as: battery life, lost satellite reception, and susceptible to the elements. If going off trail or climbing a mountain in snow it’s not a bad idea to carry both. I like to fold my map to the area I’ll be hiking/climbing in and put it in a zip-lock bag. The ability to read and understand land features on a digital (GPS) or paper map then pick out those features in your surroundings is critical to navigation.

1. Understand the scale you are looking at. The scale will allow you to convert ground distances to map distances. When looking at land features in your surrounding you can use a non scientific distance rule if you’re in a forested area.

Another way to convert actual distance to map distance is to count every other time you take a step. Example, everytime your left foot hits the ground on a step. In moderate terrain an average person will count 800 paces for every 1 kilometer walked. In steep terrain it's closer to 1200 paces for every kilometer and if your switch backing you'll need to factor that in.

2. Orient the map. Imagine your map as a giant carpet big enough to cover the areas shown. If you were to roll out the giant map carpet so its features would line up directly above the land features it would be similar to orienting the map. Orienting a map is simply turning it to line up with the surrounding features. This way when you look around it’ll be much easier to pick out features on the map and vice versa. In later articles I’ll dig into details of map orientation.

3. Identify the land features on a map.

a. Counter lines depict elevation on a map. Look at the legend on your map and it will show the contour interval, this is the amount of rise and fall between each counter line. Example if it says 80 feet and there are 5 contour lines from where you are to your destination that means you’ll have to climb around 400 feet. Realize there can be smaller amounts of rise and fall (like a 15 foot hill) between contour lines that won’t show on a map. The less the contour interval the more detail your map shows. When the contour lines are close together the land is steeper. If they’re farther apart the land is flatter. Most maps also show every 5th counter line in a darker shade with the elevation. 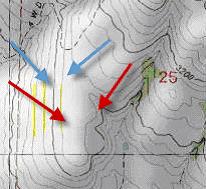 b. Roads are usually depicted as two double lines or a thick solid line. If the lines are not continues it’s usually a dirt or undeveloped road. Trails are similar except usually just a single line. c. Peaks and summits are the highest points; most have an X that shows the elevation. d. Ridges are long and narrow upper edges, angles, or crests hills or mountain ranges. To easily identify ridges look at the U or V shaped counter lines that point away from peaks. Spurs or Finger ridges are smaller ridges that branch off from a larger one.

e. Saddles are the areas between peaks and high points on a ridge. b>f. Drainages and Valleys are low points usually between two ridges or where two mountain sides come down to form a V or U. An easy way to spot these is to look for the contour lines that point point towards the peak or high point.

g. Bodies of water are depicted in blue. If a creek is depicted by broken up hashed lines this means it’s an intermittent creak. If it’s late summer there might not be any water there.

It’s important to pay attention to your surroundings at all times and look at your map often enough that you know where you are. You can use distance, elevation, direction, and land features to stay oriented. If climbing a peak going up looks much different than coming down, climbers tend to get lost and have accidents on the way down. On the way up look back to take in the view and remember it for the way down, noticing prominent features, their elevation, and reference to base camp or the parking lot can get you out of danger later on. In future articles on navigation I’ll explain the use of a compass with a map, GPS, if lost how to find your position by triangulation, what to do in a whiteout, and navigation using the sun and stars.