Mountaineering while pregnant isn’t most people’s idea of fun, my circle of friends is different.  Several pregnant friends have recently asked me if it’s ok to hike at altitude or climb while pregnant, my wife Sirima and I get asked this because friends have heard about our mountaineering experience climbing Mt. Rainer when she was 12 weeks pregnant.  My first comment is I’m a guy, climber, and survival expert, but that doesn't make me an expert on pregnancies at altitude and not wanting to be responsible for the health and well being of mom and baby recommend they talk to their obstetrician or physician.

Disclaimer:  The experience below should in no way be construed as a recommendation to climb or hike pregnant.  The ultimate decision for you and your babies safety is on you, and you should consult a doctor.  I’m merely sharing our experience and opinion on why our climb was safe and successful.

Thinking back to 2009, we just found out that my wife was pregnant, it was great news, when we decided to start trying, we didn’t realize it would happen so fast.  Just one problem, she hadn’t  summited Rainier before, and it was on her list.  This year she’d trained hard, we’d already been up half dozen smaller glacier climbs in the Cascades and just a week before we’d made it up Mt. Baker in record time and she felt great.  Sirima felt that if she didn’t summit Rainier this year it would be a long time till she got another shot at it.  We did some research on altitude and pregnancy, along with her physician previously stating activity done prior to pregnancy would be fine as long as it didn’t cause any discomfort.

A few years before a good friend (Tove)  and fellow climber had been pregnant, we hiked up numerous peaks with her and husband Brian, including above 5000 ft and 6 miles in a day.  Tove continued hiking into her 3rd trimester and ended up having a healthy pregnancy, delivery, and baby. 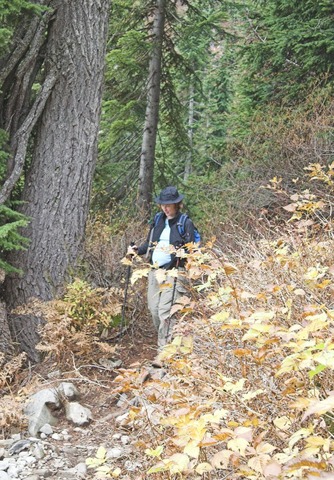 In the end the decision was ours and after considering our skill level, fitness, the fact that Sirima would be about 12 weeks on Summit day, and other beta about the conditions we decided to go for it.

According to Baby Center the lower oxygen levels high up causes babies born at altitude to weigh less and make mom more tired, we weren’t climbing Kilimanjaro and were only going to be exposed for a short time.  One of the resources we found, The Institute for Altitude Medicine, stated that as long as your pregnancy is not considered high risk sleeping at 9000-10,000 ft does not pose a risk to your fetus.  Camp Muir is at 10,188 ft high, we decided to camp on the Muir Snowfield just below camp muir and rather than take the standard 2 nights to climb do it in 1 night  The day before we drove down to Cougar Rock Campground at 3180 ft of elevation, this would give us an early start from Paradise the next day. 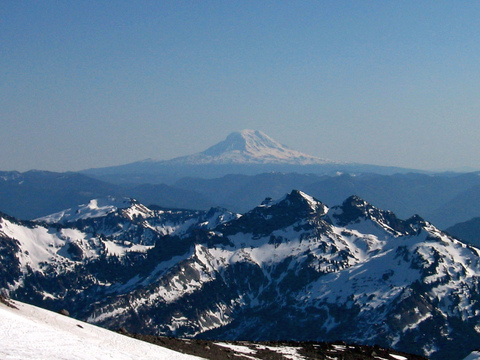 I carried most of the weight and we received info that several intermittent streams were exposed on the Muir Snowfield up to 8500 ft.  This would allow us to carry less fuel and water, instead we brought the MSR filter. 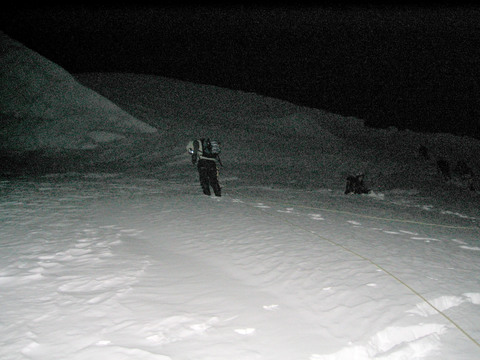 We left the Paradise parking lot about 10am, on previous climbs of Rainier I’d left this same spot as late as 2pm.  We made good time and felt great, making sure to stay hydrated and drink our water.  We took short breaks every half hour, but climbed at a pace that most would consider a decent pace, then finished and topped off our water at 8500 feet.  At Camp Muir by 2 pm, pitched the tent, cooked an early dinner and rested.  Woke up at 10:30pm ate breakfast and Sirima felt fine, by 11:30pm we were one of the first rope teams heading to the summit.  We had contemplated having a friend join us for a 3 man rope team which is generally safer than a 2 man team, but decided against it because we didn’t want any pressure of having to summit, the logistic requirements of a 3rd person, experience had taught us that 2 man teams can travel much faster, and our goal was to get up and down as quickly as possible. 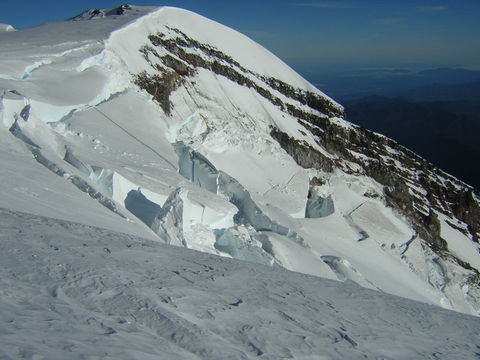 By 9 am we were on the summit and after a photo and some water made our way down 10 minutes later (because Sirima was feeling queasy and nauseous).  At 11:30 am we were back at Camp Muir and eating lunch, Sirima felt better within an hour of leaving the summit. Today our son is a healthy 3 year old.  Here’s some factors that we attribute to that successful summit climb and safe return.

1. Luck - It was the 3rd week of July, weather and snow conditions were great.

2. Prior experience and skill.  We were both experienced mountaineers, as WA locals we’d been on Mt. Rainier many times and had no qualms about turning around.

3. Minimizing exposure time above 10,000 feet was our main goal .  We were fit, stayed hydrated, and got plenty of rest before, which allowed us to spend much of our time above 10,000 feet climbing up and down rather than resting or doodling.  Stayed less than 10 minutes on the summit.  Also realize Rainier’s summit is at 14,411 ft, if this was a Himalayan climb it would be a whole different story.

4. Sirima was about 12 weeks pregnant and was over her morning sickness.  There was little risk that a crevasse or other fall would harm the fetus.  We wouldn’t have done this 4 weeks later although we’ve heard of women with baby bumps climbing in a chest harness.  We’d heard that during the first trimester moms balance would still be good.

5. We picked one of the easiest routes (Disappointment Cleaver) which we both knew well. We’d heard that during the first trimester the fetus is well protected from trauma, but a big fall could still cause a miscarriage.  We put in extra pickets and ice screws on questionable sections to avoid nasty falls but generally avoided risky sections and were ready to turn around at any unsafe signs.

6. Sirima took really good care of herself before, during, and after the climb.  Since altitude sickness symptoms can be similar to dehydration and morning sickness, she made sure to stay well hydrated and eat well during the climb.  She also wore a heart rate monitor to make sure her climbing heart rate was normal.

7.  We don’t rely on cell phones for rescue but knowing that there is some reception high up on the mountain was another backup option. We also left a detailed trip plan with family, and made sure to call them from Camp Muir, the summit, and near Paradise. 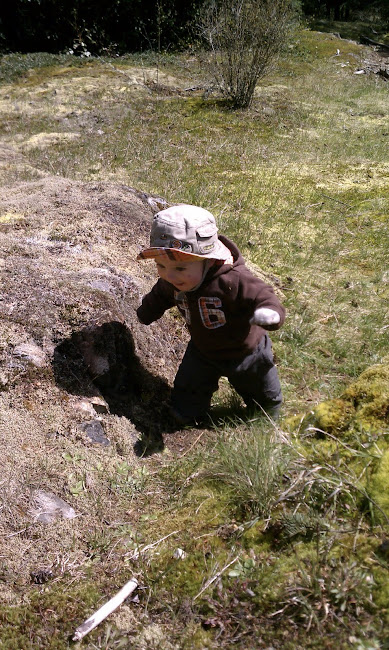 When I asked my Sirima if she would climb pregnant again her response was I’m not sure, it just depends on so many other factors.

I'm proud of my wife for her accomplishment and since that climb 4 years ago we’ve done many hiking trips to Rainier and we always enjoy telling our 3 year old that he’s already been to the summit in mommy’s tummy.

Really cool story. Thanks for sharing!!